This week we focus on some of the great women in music. Jazz diva Anita O’Day talks about her rebound from years of drug abuse, and rockabilly shouter Wanda Jackson recounts her 50 years in the male dominated music business. We’ll also pay a visit to soul queen Betty Wright, and listen to many other female voices that have helped shape the American musical soundscape.

New season, new music in the air! In addition to a lively spring mix of music, we’ll bring you the sounds of the birds in Belize, the bees in urban New Orleans… and the man who sings like a frog. New Orleans R&B star Clarence “Frogman” Henry tells us about his amphibious voice, his collection of frogs, and hanging out with the Beatles on tour in ’64. 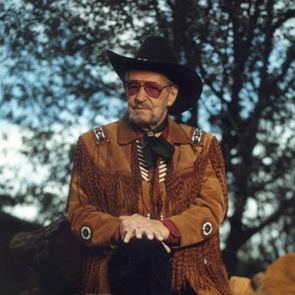 The music and life of Herb Jeffries, lead singer and last surviving member of Duke Ellington’s legendary “Blanton-Webster” band of the early 1940s. Jeffries, called “the Bronze Buckaroo,” was also the first Black star of a cowboy movie; his theme song, “I’m a Happy Cowboy” comes from the 1938 western “Harlem on the Prairie.”

Dolly Parton talks about her musical and family roots in the Smokey Mountains of Tennessee where she first broke into song, performed on the radio, and admired the fashion of the local trollop. With Parton’s “Coat of Many Colors” and hear music from across the American spectrum. Also, we’ll talk with historian Charles Wolfe about the ballads and songs of the Appalachian South.

We’ve got the Blues… and American Routes focuses on two of the genre’s heavyweights: the late Muddy Waters from Rolling Fork, MS, and the very much alive Buddy Guy formerly of Baton Rouge, LA. First, a portrait of Muddy from his band members James Cotton, Willie Smith and Bob Margolin, with biographer Robert Gordon. Then Buddy Guy who played guitar with Waters as a young rising star on the influential 1964 LP “Muddy Waters: Folk Singer,” and has been regarded as one of finest players of electric city blues for years. We’ll talk with Guy about his extraordinary life, his most recent CD “Blues Singer,” an acoustic tribute to the ’64 Muddy album, and his present-day Chicago nightclub devoted to the blues.