Relax and celebrate work and the music it has inspired on this Labor Day edition of American Routes. Worldly blues man and one-time farmhand Taj Mahal joins us to talk about tilling the soil as well as plowing through musical boundaries. Oral historian and radio man Studs Terkel discusses work in America and his own labors over the decades. And hear about balancing two careers from New Orleans tinsmith and trumpeter Lionel Ferbos You’ll also hear a work-related music mix including Fats Domino, Jerry Lee Lewis, Nina Simone, Roy Orbison and many more. 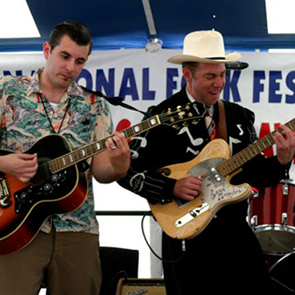 Summer is the time to enjoy music in the great outdoors. We’ll visit some festivals around the country, including the venerable National Folk Festival, which takes place in Bangor, Maine this August, and the Freedom Creek Festival, organized by bluesman Willie King in Aliceville, Alabama. Plus music from legendary gatherings like the Newport Folk & Jazz Festivals, the Monterey Pop Festival, and Montreaux. Grab a blanket and picnic basket and turn up the radio.

American Routes offers a sequel to our popular “Words and Music” show, paying special attention to great lyricists and story songs, as well as figures who’ve blurred the lines between literature and music. One of those is Steve Earle. When he isn’t busy stirring up the alt-country world with newsworthy albums like his latest Jerusalem, Earle spends time in Ireland writing short stories and haikus. We’ll also speak with African-American songwriter, poet, and radio host Oscar Brown Jr., and hear the potent and playful words of Mose Allison, Johnny Cash, Billie Holiday, and the story behind that most American phrase ‘Doo Wah Diddy.’

What comes to mind when you hear the word Diva? We’ll explore the meaning — and the sound — of that feminine term through our music mix, and through interviews with some high-minded women who give the word a good name: Bonnie Raitt, Abbey Lincoln, and young chanteuse Norah Jones. Plus songs with men and women weighing in on the topic from Louis Jordan, Memphis Minnie, Bob Dylan, Nina Simone and more.