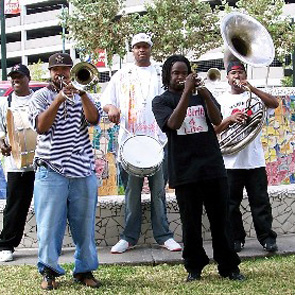 FROM THE SHOW: ROUTES MARCH ON: BRASS BANDS & CAJUN YOUTHS

FROM THE SHOW: ROUTES MARCH ON: BRASS BANDS & CAJUN YOUTHS

Hear the expansion and evolution of the New Orleans brass band sound as members of the Soul Rebels, Hot 8 and Rebirth explain how they keep tradition while adding elements of funk and hip hop.

From New Orleans to southern France, Trinidad to Brazil, we celebrate Mardi Gras masquerading and dancing to the beat of Carnival music. We'll visit with Mardi Gras Indian Chief Monk Boudreaux as he suits up in handmade, feathered regalia and struts through the streets with his gang. Then we travel to southern France for the Carnival parade and music of Nice, and costumed revelry a few hours east in the wine country town of Limoux. Back home in French Louisiana, it's the Cajun Courir de Mardi Gras where beggar clowns dance for a chicken to put in a communal gumbo feast. Plus calypso, New Orleans brass bands and rhythm & blues classics to keep the krewe mamboing through the end of Fat Tuesday.