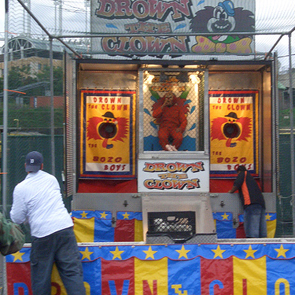 DROWN THE CLOWN appearing in 3 shows and/or playlists

EPISODES OF AMERICAN ROUTES WITH DROWN THE CLOWN

FROM THE SHOW: RED, WHITE AND BLUES: THE SOUNDS OF PATRIOTIC PLURALISM

It's an old-time Massachusetts fair, complete with cotton candy, Tilt-a-Whirl and Tom Miller. Miller travels the carnival circuit, dressed in circus makeup, shouting insults to anyone daring to attempt to hit the target and drown the clown. Meet the insult clown and find out how he knows exactly what drives his customers crazy.

RED, WHITE AND BLUES: THE SOUNDS OF PATRIOTIC PLURALISM

Music and opinion on patriotism as pluralism, and sometimes protest, from guests Merle Haggard and Joan Baez. Plus blues and New Orleans jazz versions of classic freedom songs. Also American anthems from the late King of Bluegrass Jimmy Martin and the Grateful Dead. Then we're off on a summer road trip to sample Ted Drewes' Frozen Custard at his venerable stand on Route 66 in St. Louis, and play "Drown the Clown" at a Massachusetts county fair. Join us for a star spangled edition of American Routes.

FUNK AND FIREWORKS: JULY 4TH WITH THE NEVILLE BROTHERS

Celebrate the onset of summer and the anniversary of American independence with the four faces of New Orleans' Mount Rushmore--Art, Aaron, Charles and Cyril--the Neville Brothers. Since 1954, when Brother Art hit with the ultimate carnival classic "Mardi Gras Mambo," the Nevilles have been on the scene, solo or as a group. We'll hear their legacy of soul, funk and R&B as the brothers tell us how it all came to pass, and how the legacy lives on in the next generation with Ivan and Ian Neville. Plus we're off on a summer road trip to sample Ted Drewes' Frozen Custard Stand on Route 66 in St. Louis and play Drown the Clown at a Massachusetts county fair. All that and a set of summer music from across the great American soundscape that'll make you stand and salute.